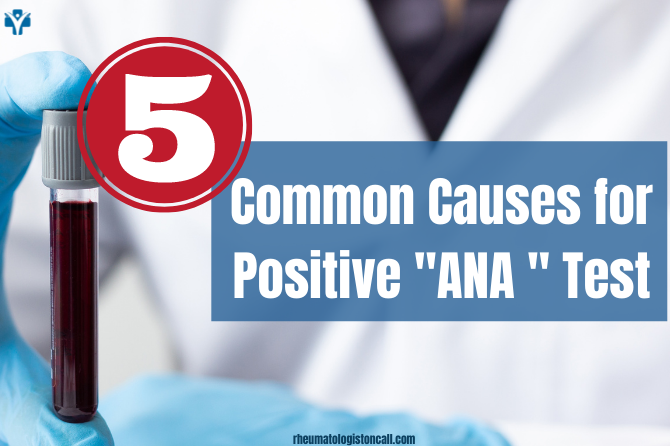 Did your doctor order a test called “ANA” ?  Did the test come back positive? Of course, you are confused and concerned and you would like to know more about this test. A positive ANA  test one of the most common referral reasons in my rheumatology office.   In this article, I will discuss the most common causes for a positive ANA test as well as:

What is the ANA test and why was it ordered?

Is the ANA titer important?

Is the ANA pattern suggestive of a specific disease?

What are the most frequent causes for  a positive ANA?

What is the ANA test and  why was it ordered?

ANA stands for “antinuclear antibodies.” As their name suggests they are antibodies. Antibodies are proteins produced by our immune system in response to a trigger, most of the time an infection. They are part of our body defense mechanism against foreign invaders. “Antinuclear antibodies” are a specific type of antibody directed against the nucleus of a cell. They can appear in your bloodstream when your immune system is fired-up to fight something foreign like viruses, bacteria or a medication.

Sometimes, your immune system might “overreact” and that will result in directing the “fight” against your own body cells. In these situations, when your body’s cells get attacked by your immune system, many organs can suffer. This is usually happening in an autoimmune disease.

Why was this test ordered?

Many patients are confused about why their doctor ordered this test. It is very important that you understand why this test was ordered. Therefore, when patients present with multiple complaints to the doctor like severe fatigue, unexplained rashes, muscle or joint pain, low grade, hair loss, enlarged lymph nodes or brain fog, just to name a few….and there is no other explanation, your doctor will order the ANA test to rule out an autoimmune disease.  There are many autoimmune diseases so this test is  like an ENTRY tool, or a screening tool for autoimmune diseases, when there is a suspicion.

However a positive test alone, without clinical symptoms does not indicate that you have an autoimmune disease.

Is the ANA titer important? 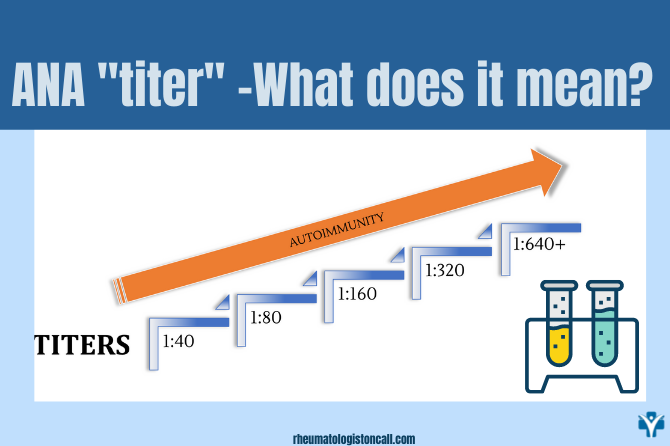 Many times, a positive ANA screening test will also come with a “titer”.  The titer of the test is important. Naturally, you are going to ask “What is the “titer” meaning?  Let me explain: The titer is the level to which the patient blood sample can be diluted and will still show positive ANA staining. That means that the higher the titer of the ANA test, the more autoantibodies are present in the sample.

Can high ANA titers be seen in healthy people?

I know that creates a lot of confusion among patients but also physicians. If you think about the prevalence of autoimmune diseases is approximately 1% , then you can imagine that this test can be many times falsely positive.

However, when these individuals carry an autoimmune disease like SLE or lupus, a positive ANA test, even at a low titer like 1:40 or 1:160 can be important to detect these diseases.

Is the ANA pattern suggestive of a specific disease?

There are a few types of patterns reported :

Is the pattern suggestive of an autoimmune disease diagnosis?

The answer is NO. The staining pattern is just loosely associated with autoimmune diseases, but in certain situations may be more frequently seen. It will direct our thoughts as rheumatologist towards possibilities.

In this movie, I discuss all these details and even more.

What are the most frequent diseases associated with a positive ANA?

Now I will discuss the most common five causes for a positive ANA that I see in my rheumatology clinic. 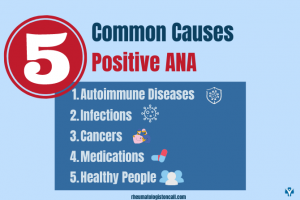 As we discussed, the positive ANA can be seen in many autoimmune diseases like:

However, it is important to remember that a positive ANA test does not mean that you have Lupus.  Patients with lupus have many other symptoms besides the fact that they have a positive ANA test. The positive test alone does not make the diagnosis of lupus. In those cases, where there are many other symptoms associated, you need a rheumatology consultation. As a specialist, I evaluate many patients and based on clinical signs and symptoms, plus additional testing, I can make the diagnosis of an autoimmune disease in my area of expertise.

Another frequent cause for a positive ANA is exposure to chronic infections. When you suffer from a chronic Infection, like tuberculosis, histoplasmosis or even mononucleosis, your  immune system is constantly activated by that virus or bacteria and will  cause  the formation of autoantibodies like ANA. A few other frequent infections that can cause a positive ANA tests are

Medications are foreign substances for our bodies.  As you suspect, our immune system, which is supposed to protect us from foreign invaders at some point may see a certain medication as foreign and will start producing antibodies against that.

Medications are notorious for causing positive ANA tests, and some of them can even cause a form of lupus, that we call drug-induced lupus. I will give you just a few examples :

Rarely,  a positive ANA can be seen in patients with a history of cancers like lymphoma or other solid organ cancers. If you were exposed to radiation or radiation therapy, you may also have a positive ANA.

As I mentioned,  positive ANA tests can be seen in normal people. Usually, advancing in age will expose your immune system to many challenges, from infections to medication, radiation, or pollution that can cause a positive ANA.

Navigating the medical system these days can be very challenging. If you have the proper medical support, education, and a true advocate on your side, your medical journey will become easier. Rheumatologist OnCall is a telemedicine company that offers support, diagnostic and the most advance therapeutic options for your disease in an affordable and transparent way, when you need it the most. No waiting time for months and no need to travel for tens or hundreds of miles. You can have a medical appointment from the comfort of your home.

Keep in mind that if you have many symptoms and a higher ANA titer, you need to be seen by a rheumatologist. It is easy now to  schedule an appointment with a rheumatologist and start your journey toward a better life and better education about understand your tests and symptoms.

Contributors to this article

Diana Girnita, MD, PhD is an US board certified internal medicine and rheumatology. She completed a PhD in immunology, postdoctoral fellowship at Harvard University, immunology fellowship at University of Pittsburgh and rheumatology fellowship at University of Cincinnati. She is the founder&CEO of Rheumatologist OnCall, a telemedicine company that serves multiple states in the US. Dr. Girnita is a graduate of the Nutrition Science course from Stanford University. Dr. Girnita was recognized many times with “Top Doctor”  award (2017-2020) and is frequently invited speaker of the US National Arthritis Foundation. Read more…

Looking to get started today?

Find Us On Map

Call for an appointment!

Feel free to message us!

Are you a returning patient?